To appreciate the geology of California we must understand minerals and rocks. Harden does not go too much into minerals.

All minerals are made of chemical elements. So let’s look into this.

: the most fundamental substance into which matter can be separated by chemical means.

You should know the name and chemical symbols of the most abundant elements in the Earth’s crust.

: the smallest individual particle that retains all of the properties of a given chemical element.
Most simple model for an atom. 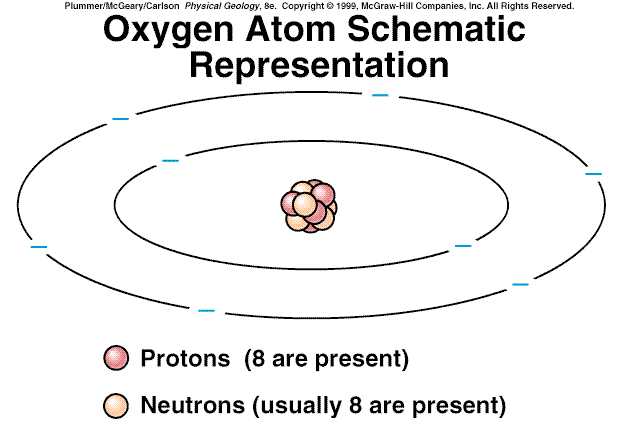 In an electrostatically balanced atom, the number of electrons equals the number of protons. For example, oxygen (O) has eight protons, eight electrons, and usually eight neutrons (we will discuss isotopes when we talk about absolute dating techniques and Geologic Time).

However, the atom may gain or lose electrons. When this happens, the atom is no longer balanced and becomes an ION. 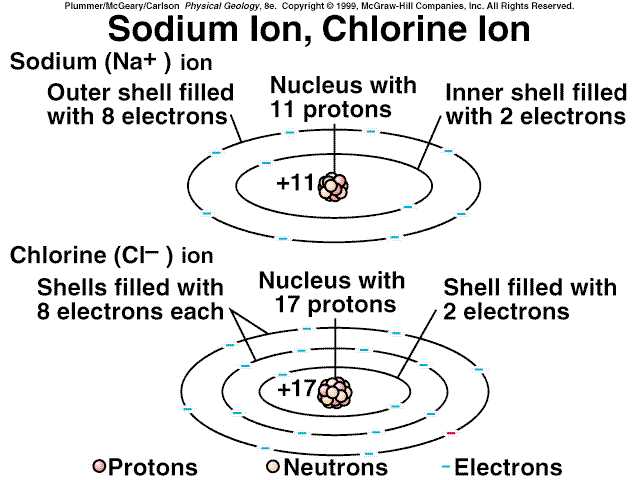 : a substance composed of more than one element.

3000 recognized minerals, we will learn about 10 to 15 (the common rock forming minerals).

Definition of a Mineral:

Glacial ice is a mineral, refrigerator ice is not. (not gas or liquid). (internal arrangement of atoms), which result in specific chemical properties.

A mineral can be composed of a single element.

Can anyone think of another mineral composed entirely of carbon?

Diamond—the hardest of all minerals. These two minerals have the same chemical composition, but very different physical properties.

These minerals are examples of minerals with fixed chemical compositions.

They basically have the same composition where ever you find them.

: is just about everywhere and is an example of a mineral whose composition can vary.

Plagioclase feldspar varies in composition by its content of Na, Ca, Al, and Si.

Plagioclase can vary in composition from rock to rock, but its composition is constant in any single rock.

Crystalline Structure: the atoms of ions in a mineral are arranged in a specific 3-dimensional pattern. Each mineral has its own unique pattern or internal arrangement of atoms or ions.

This is how glass differs from crystalline material.

Glass is AMORPHOUS, no crystalline structure.

—Calcite reacts with HCL to form CaO and CO3 gas.

Magnetism – attraction to a magnet (Magnetite is most common)

Striations are very thin, parallel grooves on some mineral faces – most commonly Plagioclase feldspar, some pyroxenes, tourmaline, and pyrite. Key thing is that these are physical grooves in mineral.

Exsolution Lamellae are thin veinlets seen mainly in Potassium Feldspar. These have variable widths and are not physical grooves. They are also not parallel.

: forms by the cooling and solidification of magma.

: molten rock, which may include suspended minerals and dissolved gasses.

: lava, pryoclastic material, magma coming out of a volcano.

: magma solidifies within the Earth’s crust or mantle.

Igneous rocks: classified based on Rock Texture and Mineral Assemblage.

Phaneritic—the minerals are visible to the eye.

Aphanitic—the minerals are not visible to the eye.

Porphyritic—When on mineral is considerably courser, larger than the other minerals. Often the groundmass or matrix is fine grained.

Pegmatitic—Pegmatite, when all minerals are enormous, i.e. big.

Phenocryst—Minerals in rocks are termed phenocrysts.

These consist of the Major Rock Forming Minerals.

Depending on what minerals you have in the rock, classifies or names the rock.

Note that rocks become darker in color as more of the darker minerals are present in the rock. We call this the COLOR INDEX. Granites have a CI of 25 or less. Basalts have a CI of 90 to 100.